“Dear Santa,
You know I wrote you several letters in the last years anyway, I think they didn’t reach you.
Perhaps you only think I’m too old to believe in you, but I totally do. OK, I don’t. But I’m 16 now and…  I hope you understand. Well, I’m only writing to you because I really want to have a pet. You know, they always say when you really want something, you’ll get it. And writing to you gives me that feeling… see I’m writing to a fat, old man who doesn’t exist just for my wish. I always wanted to have a dog, but please: a big one. I love those which look dangerous because the make me look so too. Well, I hope it’s possible.
And say hello to your reindeers from me.
Love, Liz”

Liz put the letter outside her window. She wrote the address with her left hand, to make it look like a little child had written it. “Tomorrow is Christmas” she said to herself. She wasn’t really because if your parents don’t want to realize you are simply not interested in books, coloured sweatshirts or anything your parents buy you every year… you have nothing to look forward to. OK, Liz’ parents could give her something she wants: a car, or painting her whole room black. Perhaps she would be happy with their allowing to dye her hair, but black and not like her parents would like it… “Life’s a mess!” She cried and kicked her bed (which she had painted black) with her black shoes. She went to bed to make this terrible day come to an end. (She thinks every day is terrible)

Like woke up with the twittering sound of her mother’s voice “Daaaaarliiiiing, wake up, it’s Christmas day!” Liz opened her eyes. “Christmas? What a fuc…um funny day!” Liz didn’t think the day was funny but her mother wanted her to be polite and Liz agreed with it as long she kept paying pocket-money. “Aaaaand, I’ve got a special present for you! Your sister Amy found a letter yesterday. A girl had written it to Santa Claus. Amy told me what the letter told her and so I found a perfect present for you.” She took a present and put it on liz’ bed. Liz opened it. When she saw the little dog which was in there, she almost cried. “But… but… it’s a dog!” “Yes darling. I thought you wanted one” “But not that kind of dog, mum. It’s a poodle!” “Yes, it is, Lizzy darling. And her name is Brittany.” “Brittany?” Liz couldn’t believe it. “You gave me a white poodle. And it exactly looks like the poodles on television. Can’t I ever give her another name or could I dye her fur black?” “Darling, you won’t dye it. Look how clean she looks with the white fur. And she already knows her name. Brittany?” The puppy barked. Well, it really tried to but it sounded like a guinea-pig when you’re hugging it too much. “Well, darling, I’ll let you two alone.” Brittany barked again and tried to reach Liz’ face. “You’re not going to do this, Britney… um sorry, Brittany” Brittany looked at Liz, her eyes seemed to have doubled in size. “Forget it. But if you’re bored try jumping out the window and look if you can survive.” Brittany left the bed and tried if her teeth ware strong enough to destroy Liz’ shoes. “That’s enough, Britney. Perhaps I can send you to China but I suppose you’re not fat enough.”

Amy came into the room. “Oh, you’re sooooo lucky” Brittany is soo cute! And look how sweet she barks at you! You must be the luckiest girl in the world in the world.” “And if you won’t leave the room in a minute, you’ll be the deadest! And take this furry thing with you.” Amy almost cried but she had always been very sensitive. “You’re so cruel!” That was Amy’s favourite sentence. First Amy ran down the stairs, the two people came upstairs. Of course,  Amy had to tell her mother. However, a minute later, Amy with her in Liz’ room. “What are you thinking? You can’t hurt such a cute, innocent dog.”  Amy seemed very happy about what her mother said. She looked with her “It’s all you fault. If you hadn’t said it…” –face and enjoyed every minute. “It’s Christmas darling. Won’t you come downstairs and have breakfast with us?” “I don’t want to eat anything. Wait, perhaps I could cook a nice Chinese meal.” “No, you can’t, honey. And you’re a terrible chef, darling.” “Um, mum? Perhaps Britney isn’t that bad, although she isn’t black. Perhaps we can go outside.” “That’s a great idea, darling. Have fun”

Of course Liz only wanted to do that because she needed a plan. She knew she wasn’t able to kill the dog at home. Maybe she could throw Brittany into a river and tell her mother she had fallen into it herself.  Anyway, Liz went to the river which runs through the town. She stood on the bridge and stared into it. The water looked very could, and it had to be, it was December. she thought that she couldn’t throw Brittany from the bridge. She left her at a shop nearby and went down a few stairs. On a little piece of sand sat a girl, she had to be in Liz’ age. She had long, blonde hair and a pink anorak. One hand she had in the river. The girl turned around and looked at Liz. “Hi. I’m Ashley” Ashley tried to smile. “Liz” She didn’t say anything more. Ashley didn’t belong to the kind of people she talked with. Ashley looked at the water again. She dipped her hand, with pink fingernails, into the water again. “What do you think? If you fell there, how would you die?” Liz didn’t see y way out, so she answered. “I think you die of the coldness.” “Yeah, like in Titanic.” Suddenly, Ashley began to cry. Liz felt she had to ask about the reason Ashley cried, so she did.

“It’s my Christmas present. I wanted to have a dog. I wrote to Santa as I always do, and I even chose my best writing paper, the one which smells like roses. I mean, I’ve seen those dogs on television. Cute ones that you can pet all day. You can even dress them! My mum came to me this morning, with a huge present and I thought my greatest wish had come true. I though I got a cute puppy which I always wanted to have. But what did I see? An ugly thing, black, perhaps with red eyes, I didn’t want to look in its face. My mother said this dog would be funny because when anyone sees me, they would be absolutely surprised that that’s my dog. But it’s such an ugly creature!” Ashley cried like she’d never stop.

Liz smiled. It was so… like a miracle. “You know what? The same thing happened to me but I didn’t get an evil-looking dog, I got a stupid little poodle!” Ashley stopped crying and started to look confused. “What do you want to say?” It wasn’t enough that she was sensitive and spoiled, on, she obviously was stupid, too. Liz didn’t try to explain. She took her hand and ran to the shop where she hah left Brittany. As Ashley saw her, she picked her up and petted her. “Oh, how cute! You must be the luckiest girl in the world. But why are you showing me a dog which I always wanted and… You don’t like me, right? You don’t like me, that’s why you’re showing me my greatest desires which…  Oh, you’re so cruel!” Ashley started to cry again. Liz didn’t understand why, it seemed natural to her that you’re not liked by everyone.” But she tried her best to explain. “No, I want you to change dogs with me. Could I see your… your…“ “His name is Devil. I gave it to him.” Probably she had wanted to give him the worst name she could think of. Ashley stopped crying again and ran to fetch Devil. A few minutes later, she returned. Ashley tried to hold the dog as far away from her as possible. “Well, do you really want to me your nice, cute puppy for this creature?” She asked. “Of course.“ Liz took Devil from Ashley’s arms. “Well, Britney… sorry, Brittany is yours.” Ashley picked her up and shrieked: “Thank you!” And sorry for what I said. Oh, Brittany, we’ll win every Me and my dog competition!” Liz smiled. “Sure.”

And so they lived happily ever after.. 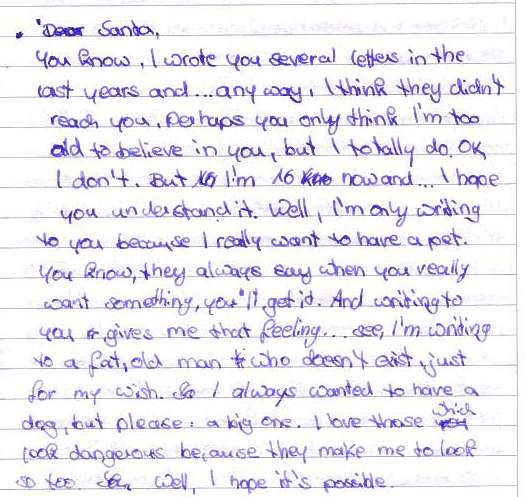